Finding The Best Glidepath For Lawmaking

One abiding trait of a good teacher is ability to make instruction interesting and compelling to students. We teachers must instill the glory of the universe together with the wonder of a simple grain of sand. There are many ways to do this. So, when two teachers get together to talk about why one of them is in public office--and what is being accomplished in that role--the teacher who is asking questions must put the lesson into context.

Donn, you have been here and you know it is about relationships, and how to have relationships with all the people in the building, explained Chugiak/Eagle River District 13 Rep. Ken McCarty, on a Zoom call from his Capital office. To be an effective legislator means using good arguments to present a bill--or to question a bill--whether to make an amendment or not make an amendment to bills. But in the end it has to do with relationships. I see in this building a lot of varied relationships. 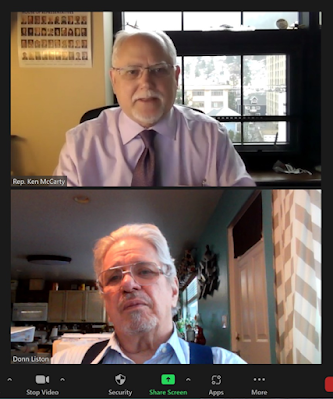 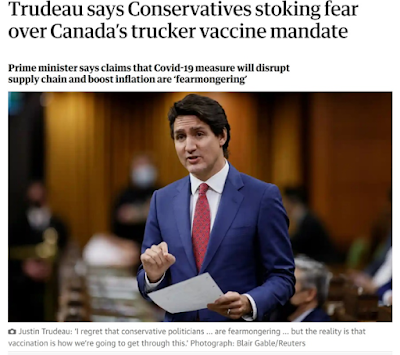 A couple of days ago I proposed a bi-partisan letter to be sent to Prime Minister of Canada, Justin Trudeau, from the Alaska Legislature, explained McCarty. Speaker of the House Stutes had said the day before: “we want to change the dynamic here and we want to be able to work together.”  So, by one o’clock the Republican group was concerned that the letter would be hijacked by the Democrats and they would submit it before I could get it out by 6:00 or 7:00 that night. I told my Republican caucus members: “One, if it does happen that’s too bad but at least the letter gets to Trudeau, and two, if that happens it will counter what the Speaker has said just the day before.” Fortunately the letter was not intercepted by the Majority. I had gathered a bipartisan group whose signatures were on it, and it was sent to Prime Minister Trudeau.[1] 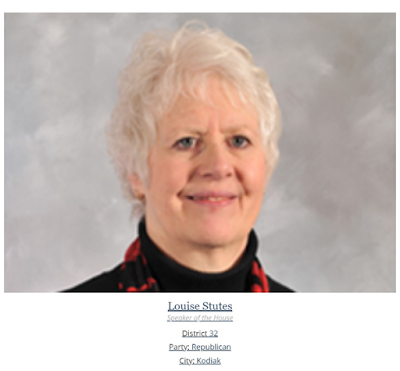 McCarty continued: I think my efforts were successful because I am trying to have a healthy relationship with all players here, which doesn’t mean I agree with everything said, but where we are hyper-polarized we don’t accomplish things. Some don’t agree with ANYTHING from the other side. That behavior doesn’t get us very far and doesn’t result in the kind of statesmanship we need for good political outcomes.

It took 30 days for the minority to organize the Alaska House of Representatives at the start of this legislative session in 2021, after certain so-called Republicans aligned with with the Democrat minority. District 14 Rep. Kelly Merrick, gained a spot as chair of the Finance Committee to continue Alaska’s special interest big government spending spree as reward for Machiavellian political betrayal.[3].

Rep. McCarty did not talk about Rep. Merrick. Her actions speak for themselves.

It is important to be able to differentiate between what is important and what isn’t, continued McCarty. We must separate crisis from the Tyranny of Urgency; what is the priority from what is a distraction acting like a priority?

In the 1960s, Charles Hummel published a little booklet called Tyranny of the Urgent, and it quickly became a business classic. In it, Hummel argues that there is a regular tension between things that are urgent and things that are important—and far too often, the urgent wins.

In the business world, this means that demands of your boss, your client, or petty office relationships can often take priority over things that actually matter, like thoroughly completing a task before starting the next one, or building unity in a work team that would instill camaraderie and longevity.

The urgent, though less important, is prioritized, and therefore the important is put on the back burner.[3]

As a businessman himself, does McCarty believes this may be why so little is getting done in Juneau?

I see this all of the time, said McCarty. There is a Tyranny of Urgency now in data collection. I say: “Show me the evidence from an objective position.” It seems many people are swayed by data that is selective and when questioned on how does this relate to certain specific variables, they don’t have an answer.

McCarty continued: Covid is a classic example. Look at the data before Covid; this is what the flu season was, and this is how many people got it, the deaths from many things and how many are in the hospital, due to whatever. Since Covid, meaningful data has became obscure. Now everybody has gotten Covid and very few people died from anything else. Everything is Covid!

How is Omicron different than flu season? Kids are going back to school and all of a sudden some are sick with the flu. In the past we didn’t freak out like is happening today, said McCarty.

So what legislation is McCarty trying to get passed in Juneau? 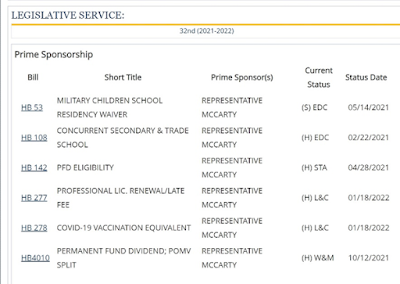 McCarty was eager to discuss his offerings:

HB 142 says military members who move out of state will no longer receive a Permanent Fund Dividend payment, explained McCarty. Last year the Permanent Fund Corporation paid out $20,000,000 to people who no longer live here but keep collecting PFD checks under the guise of “intend to come back.”

I ask: where is that crystal ball? A lot do not return but keep getting paid for themselves and their kids, said McCarty. It isn’t right.

One might ask: Why haven’t any previous legislatures addressed this issue?

What is interesting, is military people who have retired and stayed in Alaska don’t think it’s right either, said McCarty. When the PFD was first proposed to be paid on a sliding scale according to length of residency it was determined to be illegal by the courts. I would say what is happening now is illegal because if you say this particular group of people can enroll and leave the state and keep receiving the dividend then you must say ANYONE who leaves the state should be able to continue receiving the Dividend.

Another bill that McCarty is sole primary sponsor: HB 53 has passed the House 40-0 and is in Senate Education Committee now, continued McCarty. It has been presented once and will be presented again this week before moving on. It is about allowing military families “PCSing” to Alaska to be able to sign their kids up for school before arrival so their kids can get into the classes they need.

It’s an easy bill, everybody in the House likes it so we will see how it is received in the Senate, he said. I was pleased it passed 40-0![5]

HB 278 says that if you have had Covid you are naturally vaccinated. You cannot lose your job, and if you test and have the antibodies that is all you need. You don’t have to keep being tested because you already have the antibodies. That bill was presented on the house floor and is in committee.[6]

HB 108 provides for trade training for students while they are still in high school. The unique feature of this bill is that “anybody who is a master in the trades, using nationally recognized curriculum, will be able to become certified with an “M” Certification, and  can teach high school kids starting at age 14, in the trades, explained McCarty. This would mean students graduating with actual trade certification. A piece of paper that says you have attended classes means nothing in the trades; this law would empower kids in high school and also gets the community involved in education through these individuals who are proficient in particular trades providing training.

King Career Center is a great example of a school that is providing trade training, but this bill says all schools will have the option of doing this by connecting with entities in the community who will be able to help educate our kids for career success.

For example, continued McCarty, Chugiak High School has Birchwood Airport just down the street. If a kid wants to learn airport maintenance or management or aviation mechanics--or wants to become a pilot--they would do some things at the school and also go down to the airport and get concurrent enrollment in a related trade. This provides recognition of the trades and recognition of the high school.

We are getting a lot of letters about this bill, endorsing this concept. Alaska balladeer Ken Peltier has, already agreed to do Hobo Jim’s “Educated Man” song on a video to promote it.

Rep. McCarty has also co-sponsored a number of other bills. Readers may find all the bills with his name on them here: http://www.akleg.gov/basis/Member/Detail/32?code=mcc#tab7_3

What is the big picture from Juneau?

I am big into education as you are, Donn, and I want to see Alaskans who leave the state to get educated coming back, said McCarty. For example, my son is going to med school in Idaho—I visited him at Thanksgiving—along with four others who are from Alaska. Unfortunately, there is no residency program with that school in Alaska. So what are we doing to entice our people to come back to Alaska and maybe entice others to also come to Alaska for high skilled positions here?

We invest a lot of money in helping Alaskans gain higher education and our economy needs certain skills over others.[8]

I am an optimist! It is early in the session but last year we didn’t do a good job—we only passed 37 bills—so I say we need to work together, we need to make things happen. Let’s present the arguments and move along to fly the plane. 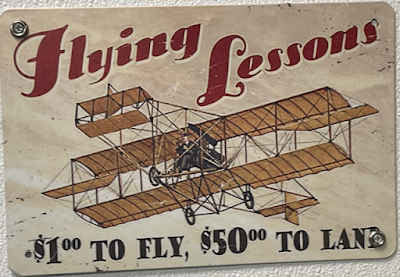 Some might say the 32nd Alaska Legislature spent the first half of this session with great difficulty learning to land.  Now it is time to learn how to fly. 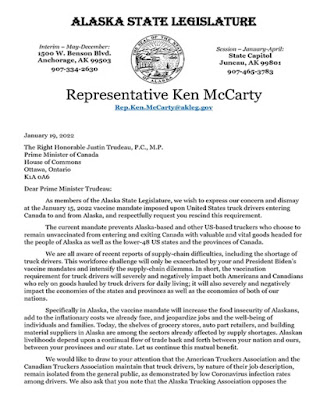 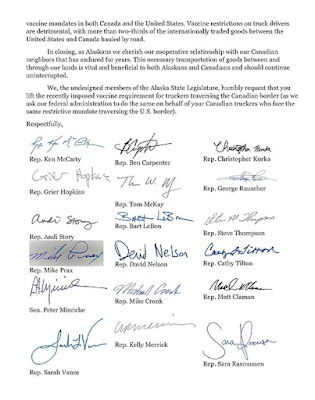 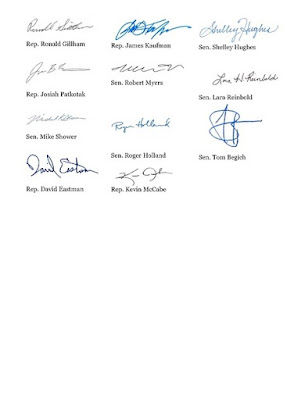 [2]The Art of Simple; fighting Tyrany of the Urgent

[3] Niccolò Machiavelli, The Prince: “The first and most persistent view of Machiavelli is that of a teacher of evil…Machiavelli’s version recommends that a prince go to the “effectual truth” of things and forgo the standard of “what should be done” lest he bring about his ruin. To maintain himself a prince must learn how not to be good and use or not use this knowledge “according to necessity.”

[4]HB 142, "An Act relating to eligibility for the permanent fund dividend."

"An Act relating to vaccination equivalents for the COVID-19 virus; and providing for an effective date.”

[8]Job Considerations to stay in Alaska 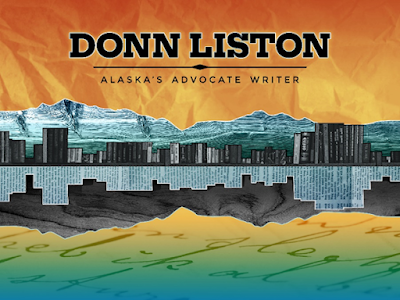 Advertising is available on this blog. I will write your story and design a display advertisement with link to that story for continuous monthly reminders to customers or supporters.