Long before civil rights confrontations of the last decade, Ernest Gruening fought for equality among people.

And with the death of Alaska’s "grandfather figure" Wednesday, Native people are remembering what he did to ensure their human rights at a time when they were threatened.

"I remember in 1941, when I moved back to Juneau to serve my second term with the Alaska Native Brotherhood (ANB)," explained Roy Peratrovich, superintendent for the Anchorage area Bureau of Indian Affairs, "I was shocked to see signs in store windows saying, ‘No Natives Allowed,’ or even ‘No Natives or Dogs Allowed.’ "

Peratrovich says he traveled to other parts of the state and saw more of the same. The ANB appealed the discrimination to Gov. Gruening, who helped them all the way.

"He was the mastermind behind the scenes," Peratrovich said. "All during the fight, he never wavered."

Gruening and representatives of the ANB met with proprietors of businesses where the signs were displayed while the problem worsened. An Eskimo girl in Nome dared to sit in the white section of the theater and was thrown out, emphasizing the need for action.

Peratrovich, who was grand president of the ANB, and his wife, now deceased, sat down with Gruening to work out a strategy. Anthony Dimond, Alaska’s representative to the U.S. House, supplied sample bills and information to help frame legislation.

The bill was introduced into the state legislature in 1943 and defeated after a bitter floor fight. Peratrovich says an Anchorage legislator taught him his first lessons in "double-cross politics" when he promised to support the bill and changed over at the last minute. The bill was defeated with a tie vote.

The law finally was enacted in 1945 after three ANB members were elected to the legislature.
During that final fight, a church representative testified that it would take 30 to 100 years before an Indian could associate with whites if the measure passed, according to Peratrovich. When the final vote came, however, equal rights became a law in Alaska.

"I understand that bill is still the best in the United States," Peratrovich said. "It was 20 years ahead of its time."

Since the passage of the law, only one complaint has been filed, and that was won by a black.

Not only the Indian people but all minorities owe a great debt to Ernest Gruening," Peratrovich said. "It was tough to be an Indian back then. I’m glad times have changed."

Sometimes you just can’t win when you’re dealing with the bureaucracy.

And even when you’re winning, you lose. At least, that’s the way Roy Peratrovich, Anchorage Bureau of Indian Affairs superintendent, must feel.

Anyone who knows Roy will tell you he’s a straight shooter. He sits square at his desk and looks you square in the eyes. He doesn't pull any punches but when he can do something for his Alaska Native people, Roy will knock himself out trying.

Some time ago a memorandum was addressed to Roy, through Clay Antioquia, Juneau area director, from Morris Thompson, Bureau of Indian Affairs commissioner in Washington. The correspondence explained "objections have been raised at your assisting Alaska Natives in filing claims with the Bureau of Land Management and thereafter representing claimants before the Interior Board of Land Appeals and the Office of Hearing and Appeals."

The memo goes on to explain that the objections were based on the superintendent’s efforts acting as an attorney in prosecuting claims against the United States and working as counsel for the Department of Interior without permission. Both were alleged violations of specific laws.

Representatives from Interior agencies met last March 14 to study the problem and determine what to do about alleged violations. Peratrovich was told nothing of the objections or the meeting.

Nobody wants to admit who complained about Peratrovich’s efforts. But to keep the intra-agency strife to a minimum, the BIA is attempting to secure funds to hire private counsel in the prosecution of future claims. Until then, Peratrovich has been authorized to assist claimants as long as they are given written notice that he is not really an attorney.

When contacted about his new authorization, Peratrovich explained a new fact of the bureaucratic bungle. He says he never received the official memorandum from the commissioner and only knew of it second-hand. Now he has been given new authority, after a complaint he never knew of, on an issue he never knew was an issue.

"We appealed 81 allotments and we were upheld on all appeals in the Washington office," Peratrovich said, adding: "After 33 years in federal service, 26 of which were in BIA, nothing surprises me."
at June 20, 1974 No comments:

How Agriculture Works in Alaska (2021 © donnliston.com)   The theme of the long-time Spenard bar fits many, but not all, Alaska farmer... 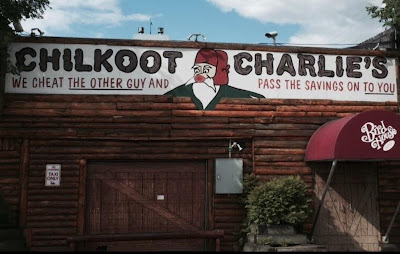