September 27, 2017Echo Magazine https://www.echoak.com/2017/09/warning-signs/
It has been said that suicide is a permanent solution to a temporary problem.


Like a lot of Alaska superlatives, the high rate of Alaska suicides was impressed upon some of us growing up in high-risk social circumstances. We were told by teachers and counselors that many people in Alaska have “issues” that could be so profound as to cause them to want to harm themselves. It wasn’t as much of a concern when I was in elementary and junior high school in Anchorage, but when my family moved to the bush, we found the reality of suicide in Alaska was not being exaggerated. It is a longstanding serious problem for small communities.
Today Alaska maintains one of the highest rates of suicide in the country.
The problem is so bad we have a Statewide Suicide Prevention Council. They publish information collected by the Alaska Bureau of Vital Statics. Collecting and distributing this data is necessary to bring awareness to the high rate of suicide in Alaska. It is nearly double what it is in the rest of the country. In the U.S. the suicide rate was 12.57 suicides per 100,000 population in 2013. In 2014 Alaska’s rate was 22.3 suicides per 100,000 people.
During 2014, 82.6% of suicides in Alaska were men, 17.4% were women. Alaska Native males died by suicide at a rate of 50.9 suicides per 100,000 people, which is nearly four times the national average!

More than 90 percent of people who die by suicide have depression or other diagnosable, treatable mental or substance abuse disorder and an estimated 75 percent exhibit suicide warning signs.
//dhss.alaska.gov/SuicidePrevention/Documents/pdfs_sspc/AKSuicideStatistics2015.pdf
But those are just numbers; which do not show the profound effect and heartache suffered by the people left behind after a loved one has killed him or herself.

What can we do?

If you know someone is suffering, watch for warning signs:
The helpless feeling of losing someone who has taken their own life can be overwhelming and those closest might be inclined to blame themselves. But some people who die by suicide do not show any warning signs. They have become adept at hiding behind a fake smile, addiction, or a closed door.

Our public school teachers must now also be social workers!

New Alaska teacher certification requirements established as a result of AS 14.30.362 require mandatory training requirements for teachers, including for suicide symptom recognition and prevention. A new instructional module to help educators and others to recognize symptoms or circumstances leading to suicide has been released by the State of Alaska. The theme of this online course is: Overcoming Adverse Childhood Experiences (ACEs) in Alaska Schools; Trauma and Its Impact on Learning.
According to the description of this training: “ACEs include abuse, neglect, and other household and community dysfunctions that may lead to biological changes in the brain and body of developing children and youth. These changes may make learning more difficult and have the potential to lead to lifelong health problems.”
//stopsuicidealaska.org/
My own family was dysfunctional, but my parents didn’t drink or use drugs. From what I have witnessed in Alaska since I was a kid, using substances to alter consciousness is one indicator of mental illness. Alaska’s desperate level of alcoholism has now morphed into multiple substances–up to and including heroin–that serve only as a living escape from reality.
National Suicide Prevention Lifeline 1-800-273-TALK (8255)
Careline Alaska Suicide Prevention and Help Line 877-266-4357
Veterans Crisis Line 1-800-273-8255 press #1
at September 27, 2017 No comments:

Anchorage Daily News on the Brink 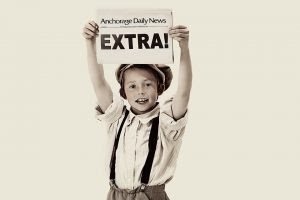 There was a time when Anchorage was a two-newspaper town; we had three television stations delivering supplemental news in black and white, with color highlights.

As a kid carrying the lightweight Anchorage Daily News along the length of 5th Avenue from Alaska Sales & Service to Airport Heights Road, I had it easier than the Anchorage Times carriers with all that paper’s advertising bulk.

Today the re-purposed Alaska Dispatch News looks to be heading toward liquidation under Chapter 7 bankruptcy–instead of reorganization under Chapter 11–as the latest publisher had hoped. If so, this is a tragedy nobody could have predicted might happen after it had come so close to this in the 1970s.
As of Monday, September 11, however the Daily News has been purchased by the Binkley Family of Fairbanks. Upon being asked if that move was rational, the Binkley representative said: “I’m representing three irrational Fairbanksans who thinking they’re doing the right thing.” He confessed that the Binkleys might be doing the same as Alice Rogoff once did, but he was confident they could do it better and make it work.
Ryan (Binkley) had a simpler explanation.

https://craigmedred.news/2017/09/11/binkleys-buy-adn/
Norman Brown had started the Daily News in 1949 as a knee-jerk reaction to the powerful interests of Robert Atwood, one of the leading promoters of Alaska statehood. The Times was the newspaper of record and a predominant voice of Alaska commerce and politics.
Daily Newspapers for my delivery arrived each afternoon in bundles tied with string. I loaded them into front and back carrier bags over my shoulders, so I could pump my heavy bike with balloon tires from the Martin Arms Apartment complex--where I lived at 3rd  Ave. and Unga St.--all around the route. No matter the weather, year-round after school or during summer break, that was my job. The people who hung around flight operation businesses along Merrill Field sometimes made fun of my puny papers, but no carriers of the Times independently purchased 10 extra subscriptions of their paper and sold them individually at bush carrier waiting areas, to gain pockets full of silver dimes.

I was pushy and people bought my papers.

The Daily News has its roots as an underdog newspaper, and while I was politically oblivious as a youth to why the Times was a bigger paper, the money was good for a 13-year-old with little parental supervision.
Larry and Kay Fanning purchased the Daily News from the retiring Browns in 1967. He was formerly managing editor at the San Francisco Chronicle and later, editor at the Chicago Daily News, where he worked for Kay’s ex-husband, Marshall Field IV. Marshall had died shortly after divorcing Kay and she brought her three kids north from Chicago on their Alaska Adventure, where she had landed a job writing for the Daily News. With her inherited money and shared ambition to further this “alternative voice,” the enterprise began building in journalistic stature.
Tragedy struck again for Kay in 1971 with the death of Larry from a heart attack at his editor’s desk at age 57. She was a widow for the second time and endeavored to make her financially strapped paper Alaska’s version of Katharine Graham’s Washington Post.
I remember the Watergate headlines coming across the teletype machines with stories from the Washington Post while working as a reporter at the Daily News.

We all knew Alaska was destined for great wealth after the discovery of oil at Prudhoe Bay–and the Billion Dollar Lease Sale of 1969–but many institutions such as Alaska Methodist University and the Daily News were on the brink of bankruptcy. The Fannings had recruited a cadre of young reporters for their Journalism crusade and the Methodist Church was looking for ways to make its valuable Alaska university investment appealing to parents with means who were not necessarily Methodist. This was the breach I bolted into as a young man—ultimately getting a bachelor degree from AMU and simultaneously working as a full reporter at the Daily News upon graduation from what is now Alaska Pacific University.
Those were interesting times for Alaska following the settlement of the Alaska Native Claims Settlement Act of 1971 and construction of the Trans-Alaska Pipeline. Although the Daily News was able to publish hyperbolic dramatizations of changes occurring in Alaska with natural resource development, a series about the Teamsters Union finally brought a coveted Pulitzer Prize to the paper in 1979. By then I had left to start my own publishing and public relations business, but the war with the Times had caused the two factions to form a joint printing agreement to try and keep Anchorage as a two-newspaper town. In the face of continuing dire financial straits, Fanning sold the Daily News to the McClatchy Newspapers to ultimately win the newspaper war–and turn Anchorage into a one-newspaper town–but remained as publisher of the Daily News. Circulation reached 50,000 in 1982. In 1983 Fanning moved to Boston to work at the Christian Science Monitor.  Her Alaska Adventure was finally completed.
Many of us who have had time in harness at the Daily News have watched over recent years as this once aspiring enterprise, dedicated to training promising journalists to record the epic events of the 49th State, has become the plaything of a billionaire’s estranged wife. Rogoff purchased the Daily News from McClatchly for some $30 Million.
According to recent documentation by another former ADN Reporter, Craig Medred: “Overall, the Dispatch News’ accounting of assets and liabilities filed this week paints a picture of a company deep under water.
“It has debts totaling almost $21.5 million and assets of only about $11.9 million – some of which appear inflated. The company claims to own about $2.5 million worth of office furniture, fixtures, computer equipment, communications equipment, and software, plus $4.5 million in “construction in progress.”
Additionally: “The Dispatch News is on track to lose a record $8 million this year, and remains deeply in debt to Northrim Bank. Northrim helped Rogoff swing the $34 million deal to buy the News. She paid McClatchy about half of what the Boston Globe, a newspaper seven times bigger than the Daily News, sold for a year earlier,” according to Medred. https://craigmedred.news/2017/09/01/lost-in-weeds/
Large newspapers everywhere are failing as financial requirements to print and distribute information for eager readers become unmanageable at such scale. Small regional papers are sprouting up all over with positive community promotion and sharing of ideas easily accessed in digital formats. The Echo News is one such smaller publication launched by an Alaskan Family publishing enterprise steeped in Alaska values and tradition. All we can do, however as we watch the collapse of the Daily News, is marvel at the arrogance on full display with each legal discovery.
Alaskans deserve better.

Decentralize Anchorage. It Really Is Our Only Solution

What does "Government By the People" mean? By Mike Tavoliero T he era of big government is over. But we cannot go back to the time... 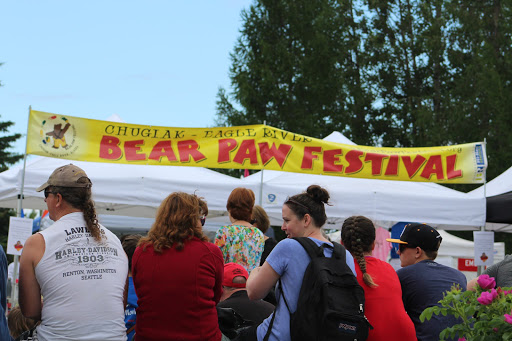