Investing in our Community: Cliff Cook takes no chances with Eagle River

More than 80 people sat, stood and lined the walls of Room 170 of the 12001 Business Boulevard building December 14 to show support, at the Eagle River Community Council meeting there, for Cliff Cook in his mission to establish a Community Patrol for this area.

By the end of a lot of discussion, the Board passed a motion of support—to be reviewed in one year.
Many stayed to the bitter end after 9 p.m. having earlier raised their hands to support establishment of a patrol and many also pledged to help out with volunteer hours.
For months now Cook has been going hat-in-hand seeking support from area community councils in a quest to establish something similar to what has been functioning well in Birchwood more than nine years. This was not his first time before this council seeking support, however. Cook has also given his presentation to Eagle River Valley Community Council which was unable to vote for lack of a quorum. South Fork Community Council voted unanimously to support Cook’s efforts.

He conducted his first patrol November 7.
When asked by ER Council President, Michael Foster why he needed a statement of support from the council, Cook said he doesn’t really have to have it, but he would like to have it. He explained that he was fed up and wants to establish a credible monitoring service to depress criminal activity in Eagle River.
A closed FaceBook Page, started by “Candy Wafer” drummed up support for this event and the council board seemed somewhat taken aback by the outpouring—even defensive at times during the meeting. A number of speakers at the meeting expressed fear for their families by publicly speaking out about crime.
“My intent tonight is to get all three councils in the Eagle River area to support this effort,” Cook explained in his presentation to the board. “I’ve been educated over the last nine months on the right way to do things and the wrong way to do things. I’ve gone along on APD ride-alongs; there are eight other community patrols in Anchorage, and we are simply hoping to establish the same here.”
The Anchorage Coalition of Community Patrols has a website: //www.accpatrols.org/index.html
Upon first impression, this retired Air Force gentleman could be an undercover cop in his leather jacket and pressed army green trousers. That role is believable, but he articulated the need for measured responsibilities as a community patrol officer being a lookout and reporter of criminal activity, rather than an authority figure.
“We all know crime has risen,” Cook continued. “I looked at the stats and crime has risen this year over last year in all community council areas. In Eagle River-Chugiak, “over the last few weeks there was an armed robbery down on Business Boulevard at the pizza place, and the scary thing is the individual with a gun actually shot when he left—so where did that bullet go? Starbucks was robbed and the thief was so desperate he couldn’t get money out of the cash register and ended up taking the tip jar. Finally, it was confirmed that an armed robbery happened at Microtel within days of Starbucks’…”

Later in the presentation he stated flatly: “Our intent is deterrence.”

Community Councils are defined under Municipality of Anchorage code as: “…private, nonprofit, voluntary, self-governing associations composed of residents, property owners, business owners, and representatives from other entities located within geographical areas designated by the Assembly. Community councils serve an advisory function to the Assembly in the local government process.

The board of this community council seemed reluctant to endorse Cook without his efforts being established in a specific non-profit corporation structure. He explained that there needed to be more people involved and legal requirements fulfilled for that to happen. It took a while for the Birchwood community patrol to become formalized in that way, he explained.
There are some 37 community councils in the Anchorage area. Manager of the Federation of Community Councils, Mark Butler, and president of the Federation, Kyle Stevens, were both also in attendance. They offered insights into how other Anchorage Community Councils support community patrols. Butler also pledged that donations to this effort will be possible through the Federation.
//communitycouncils.org/servlet/content/1545.html

They have accepted no donations or other compensation but offers have been made. The statement by Butler–that a means for routing financial support will be established through the Federation–was great news.
“When I first took interest in the community patrol, I did present and hope that funding would come from the councils and possibly come from the Chamber (of Commerce) because as I’m sure you’re aware in any endeavor the initial start-up costs are always the hardest and where the bulk of the expense comes from,” explained Cook after the meeting. “After months of non-progression, I simply got tired of the hoops and brick walls and decided to do it myself. There are many other community members willing to do the same. People are already patrolling on their own. We really are tired of the crime and want to do something about it.”
While he was thankful for the support from the ER council, Cook has no illusions about the amount of work ahead: “I did see a lot of people wanting a patrol but nobody took that extra step and actually get one officially started,” he said. “After what you saw at the meeting do you blame them? People tend to get beat down to a point they just say ‘to heck with it’ and move on. I think that’s what the board was hoping would happen.”

To contribute to the ER Community Patrol:

We Don't have to be Victims:

The Long View of Crime in Alaska (2020 © donnliston.com)   During the 1970s construction of the Trans-Alaska Pipeline we saw our state ... 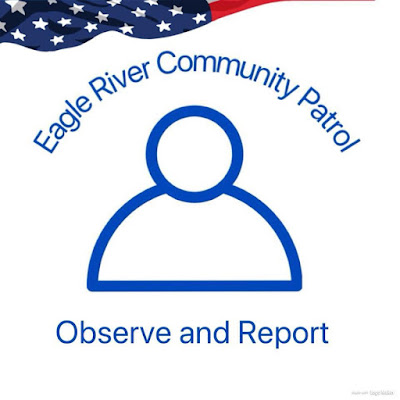