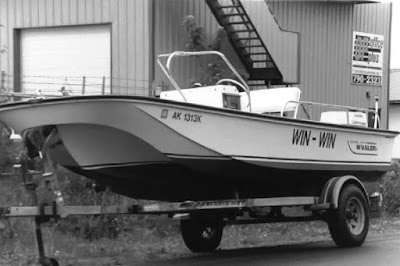 This story began with that phone call nobody who lives in a coastal Alaska community ever wants to receive late at night. It was from my supervisor’s wife who was asking if her husband, with the prescient first name of “Fate,” had told me he was taking my boat out to go fishing.

He hadn’t, but it was alright if he did take it out. It happened occasionally and that’s just the kind of friend I was.
Fate’s wife had already called the Coast Guard because he was missing and Fate’s vehicle with my boat trailer connected to it was parked at the North Douglas launch ramp. It was dark, nobody had heard from him, and she was worried.


Douglas Island is across Gastineau Channel from Juneau. My wife, Cathy and I lived in Juneau.
A search had been launched. According to the news report:
A family member told the Coast Guard at 11:23 p.m. Saturday about the overdue party and their expected fishing area. The Coast Guard’s Juneau station sent a crew of three on a 41-foot rescue boat at about midnight, said spokesman Mark Hunt.
About three hours later, the crew saw the beached men waving sticks glowing with embers. Rescuers brought the boat to about 50 feet from the shore, and a swimmer carried a survival suit and two dry suits to the men.
“We just piled into them,” Flynn said. “We floated on our backs and they sort of towed us in.”
//juneauempire.com/stories/050498/rescue.html#.WgDvzGhSzIU
It was the first week of May, 1998, and still cold that year. I had just paid for all new canvas coverings with clear zipper windows around the boat, and everything was in top shape.

As Fate should have it, I was confident of my boat.

A 17-ft Boston Whaler Montauk is a nearly unsinkable watercraft. I’ve seen State Trooper boats exactly like this one. In early advertisements for this boat they put a man aboard and then cut it into two parts with a chain saw. Both halves continued to float and the man stayed on top of the water.
This Boston Whaler had an oversized motor on it because it had been a Sitka boat. When you are out in the waters around that community—which directly faces the Gulf of Alaska—you had better be able to get into harbor in a hurry when bad weather is on the horizon. I had bid on this boat as a Credit Union repossession and it had the ominous registration numbers AK 1313K.
I named the boat Win-Win because I had been the second bidder, but when the first bidder was told he won the boat he acted like a jerk and they withdrew the offer. I offered less than the high bidder so it was a “win-win” for me.

There wasn’t much I could do about the whereabouts of my boat that night but I was relieved the next morning when Fate and the two companions he had taken fishing were back home safe.

The report in the Juneau Empire was succinct:
Rep. Ethan Berkowitz and two companions were rescued unharmed from Portland Island early Sunday after their skiff overturned Saturday night.
Berkowitz, an Anchorage Democrat, his aide Patrick Flynn of Anchorage, and Fate Putman of Juneau, the assistant business manager for the Alaska State Employees Association, were trolling for king salmon off the west side of Portland Island when a wave swept over the stern and rolled the 18-foot Boston Whaler.
That was the official report.
What Fate later explained to me was they were trolling and all three of their fishing lines hooked onto the bottom at the same time. That required them to all try to pull their lines loose at the same time standing side-by-side at the stern of the boat. That is where the heavy motor was also. As they were screwing around with their lines the water was sneaking over the transom cutout for the motor and filling the boat. Before long enough water was in the boat, and enough weight was in the stern, that the boat slow-rolled.  I guess they all realized it at the same fateful instant and Fate had to actually swim out from under the boat. Fortunately, he was wearing a Mustang survival suit.
That is the non-politically correct version of what happened.

The three of them clung to the bottom of the boat and it drifted to shore demolishing the canvas I had just installed as it scraped along the bottom.

Again, from the news report:

They remembered seeing smoke from a campfire on the east side of Portland Island, which is west of Auke Bay and north of North Douglas. They hiked the western length of the island, rounded the southern point and found the campfire, now dwindled to a small ember. Using a Dixie cup left there, driftwood and sea grass, they built a fire and dried their clothes.

This may have saved them from hypothermia.

I wasn’t too happy about this chain of events, but there wasn’t much I could do about it. Yeah, they were sorry that they weren’t paying attention and wrecked my boat, but stuff happens, you know…
Rep. Berkowitz received some recognition from the legislature for surviving this ordeal; they gave him a round life-preserver with his name on it. Yuk-yuk.

We went out and salvaged the boat and I got to hassle with an insurance company over how much they were going to pay to replace it. The motor was a total loss and I ended up buying the hull back for a minimal amount.

Once the hull was cleaned up and everything restored to good order, I made a flyer announcing it was for sale with a photograph that I posted all over Juneau. The headline read:
Boston Whaler boat with trailer for sale!


Couldn’t even drown three Democrats in it.