Legislative skits skewer, but too selectively

Easter was on April Fool's Day this year and Good Friday was chosen as a great time to feature the Annual Legislative Skits that began decades ago as a fundraiser for the Democratic Party. The show, which features staff making fun of their bosses, is now unaffiliated to any political organization but gives money to worthy causes in Juneau.

Being a people watcher myself, familiar with this Juneau tradition, I went to observe what I knew would be The Beautiful People in all their glory. 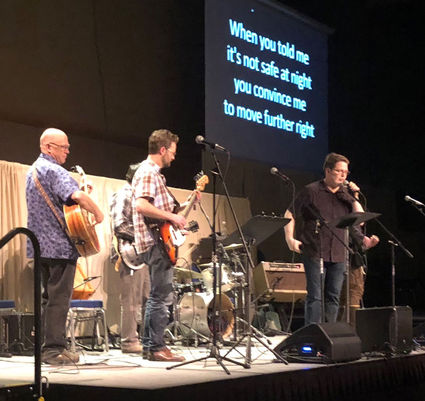 I don't begrudge a once funny Saturday Night Live television show-which over the years has become less funny. My sense of humor has ripened as I seek subtlety and double entendre over blatant ribald comedy. That's not SNL's fault; their advertisers are looking for a different customer base than cheap-skate old guys with good memories. These Legislative Skits use an SNL format to make fun of the legislature as an institution, to humorously portray familiar legislative situations from the past 74 days of session, and to take some cheap shots at legislators they could be certain would not be in attendance.

It is possible that 360north.org Gavel-to-Gavel coverage of the legislature has become an Alaska soap opera; it cannot be a reality show. Calls come into our legislative office (Rep. Lora Reinbold) from constituents who are very tuned into what is going on in committees and on the floor of the Alaska House of Representatives. Thanks to the Legislative BASIS system, constituents are able to track bills and hear what changes are made in committees, before deliberation on the floor and either passage over to the Alaska Senate for consideration, or failure.

This has to be a good thing for our republic.

When Alaskans voted to move the capital out of Juneau during the 1980s, the act of doing that physically was thwarted by a committee dedicated to showing how much it would cost. No committee has since formed to show how much it has cost to keep the capitol in Juneau.

The argument then was that technology could provide access equivalent to actually being here. Don't you believe it. 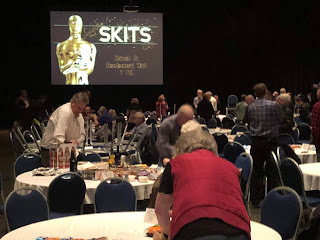 The band began the evening's festivities with a song called "Learning to Lie." It was an appropriate beginning given our state's current economic situation and legislative coalitions grandstanding on how to address the challenge before returning home to face voters. From the song: Well some say cut and some say spend; some say raid, some say defend. If I tell the truth I'll lose my fans, but I think I have a plan. I'm learning to lie and double down so I don't get run out of town. I'm learning to lie about these things because the truth really stinks.

Another song about Sen. Mia Costello, who originally supported the crime bill SB 91, assigned motives to her change on that support: This law needs repealing Mia can't you see? Girl, we just can't tolerate lower sentencing. When you told me it's not safe at night, you convince me to move further right. 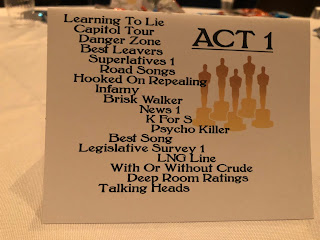 I look at this kind of change by an elected official as instructional; they must respond to concerns from voters who elected them to represent their districts in Juneau. On the other hand, being in Juneau and subjected to the influences inherent in this place, creates a dichotomy for anyone elected to represent interests of their districts when here. 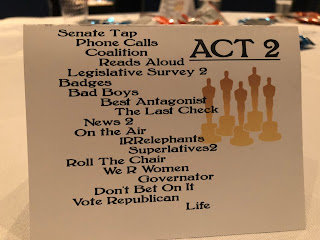 These skits demonstrated this dilemma. There is no pretense of fairness or balance; everybody conservative is fair game, anyone liberal gets a pass. To really be balanced the organization of these theatrical antics should have to feature skits by thespians of equal conservative/liberal persuasions. I don't know if the liberals could tolerate such a balance and I don't know if conservatives would care to present mockery of political opponents in this kind of forum.

These skits were much tamer than in past years, but they were mostly one-sided. One of them portrayed a Republican conservative as being homosexual while members of the Majority Caucus were generally given a pass on criticisms of their stands or styles. The $500,000 study of effects of vitamin D by former Republican from Homer, Rep. Paul Seaton, was given slight mention while some Republican women, like Sen. Shelley Hughes were mocked unmercifully. Chugiak Rep. Dan Saddler was selected as someone "most likely to be playing the ukulele on a beach," while Eagle River Rep. Lora Reinbold was referenced as "the conservative leader" of the House.

It could have been worse, but establishing half of the skits presented by liberals and half by conservatives, would be much more interesting.