Why Alaskans Wanted Statehood Part 2 of 2

Tangible final steps toward Alaska Statehood began in 1955, but a lot had to happen before that the Territorial Legislature was a creation of the Second Organic Act of Congress, passed in 1912. This act allowed five things the legislature could do and forbade the passage of laws in 17 other realms, including divorce, game, fish, roads, insane persons, or disposal of land. The legislative body met every two years for no more than 60 days at a time.

Some Alaskans chafed at so much congressional involvement in state affairs. ¹
This resulted in the formation of a movement. The strongest voices of statehood at this critical time were Ernest Gruening and Edward Lewis “Bob” Bartlett.
Gruening received his Medical Doctor degree from Harvard University in 1912, but instead of practicing medicine pursued a career in journalism. As a writer, he became noticed by President Franklin D. Roosevelt, and his service as an advisor led to an invitation to become a permanent member of Roosevelt’s New Deal Administration. Gruening was appointed in 1934 to be the first director of the Division of Territories and Island Possessions in the Department of Interior, which was established by presidential executive order.

A younger contemporary of Gruening, Bartlett was the son of Klondike pioneers. He was born in Seattle and grew up in Fairbanks. He, too, was a journalist—reporter for the Fairbanks Daily News-Miner—from 1927 to 1933. Bartlett was appointed Secretary of Alaska, a position equivalent to Lt. Governor, by President Roosevelt. Bartlett resigned in February 1944 to become a candidate for the Congressional delegate of Alaska.
These two had contrasting personalities: Gruening was forceful and determined while Bartlett was quiet and persuasive. They formed a lasting friendship and complementary working relationship. While the governor soon polarized Alaskan politics into pro and anti-Gruening camps, by the sheer force of his personality, Bartlett widened acquaintances among all elements of the territory’s population and built political goodwill.³
The statehood movement soon developed into a crusade under the leadership of these two men. Previous to this, the movement had ebbed and flowed, but they gave it vitality and dynamism. Gruening promoted statehood on a broad front speaking all over the nation and writing about Alaska statehood everywhere. He clearly defined the devils as “outside” interests. Bartlett was not as flamboyant as Gruening, but he was just as tenacious, primarily in the halls of Congress as Alaska’s non-voting Delegate. Against advice from seasoned political advisors, Bartlett ran on a statehood platform in the Democratic primary of 1944 and went on to win the general election by 7,255 to 3,763 over Republican John E. Manders.
Alaska gained national prominence by its strategic and tactical participation in World War II. In the face of a prevailing mood of optimism after the war, and our place as U.S. Air Force “Top Cover for America,” the Alaska House of Representatives sent a memorial to Congress seeking the opportunity to have control over the territory’s destiny as had been proclaimed in the “Four Freedoms” declaration of the Atlantic Charter. This pact between the United States and Great Britain set out a vision for the postwar world. It stated that small nations and minorities had a right to choose their form of government and have control over their destinies.
Following a request to admit Alaska as the 49th state, Gov. Gruening asked lawmakers to establish provisions for a referendum on the statehood question—with a vote to be taken in 1946. Gruening also knew Congress could not be expected to act on such a request without a loud call of support for it from Alaskans.

Alaskan statehood supporters now had their job cut out for them. This was a job for a strong woman!

Mrs. Evangeline Atwood, the wife of Publisher Bob Atwood, of the Anchorage Daily Times, stepped up to lead the charge by organizing a nonpartisan, nonprofit, territory-wide Alaska Statehood Association. It took a while to get rolling, but soon chapters were formed in Anchorage, Fairbanks, Juneau, Ketchikan, Sitka, Wrangell, Palmer, Valdez, Kodiak, and Seward. Mrs. Atwood was a trained social worker, all around do-gooder, as well as the sister of Elmer Rasmuson, Bank of Alaska President. Their father, Edward, was Alaska’s Republican national committeeman.
George Sundborg was a reporter and editorial writer for the Daily Alaska Empire in Juneau. He was hired, with Gov. Gruening’s blessing, to prepare a study of Alaska for use in making a case for statehood. While statehood forces were organizing their campaign, Congress reassembled in 1946. In his State of the Union message in January of that year, President Harry Truman recommended that the territory be admitted as soon as the wishes of Alaskans had been determined. Sundborg’s statehood report was printed and distributed throughout the state and caused Alaskans to focus on the reasons why Alaska should gain statehood. Of the 56 pages in the report, only five considered arguments against statehood, but arguments for it were appealing, and most who went to the polls at the referendum understood the issue. Delegate Bartlett was re-elected by a vote of 11,516 to 4,822 votes, and statehood was approved by                                         9,630 to 6,822.4

Alaska’s population at the 1940 census was 72,524. A turnout of 16,384 voters amounted to a respectable 23 percent of the total population interested in this issue.

Public hearings on a bill introduced into Congress by Delegate Bartlett on January 3, 1947, gained support on several fronts and many Alaskans flew to Washington D.C. to testify in favor of statehood. The argument against statehood was that Alaska wasn’t ready to take on the responsibilities inherent in statehood–particularly financial requirements. Charges by Territorial Senator Edward Coffey, an Anchorage Democrat, included the argument that the only people being heard were special interests while common Alaskans were not aware of what statehood meant to them. As a result, the House Subcommittee on Territories and Insular Possessions came to Alaska to see for itself and hear Alaskan’s views. From August 30 to September 12 the subcommittee heard testimony from 92 individuals at various Alaskan towns. Subcommittee members who had previously been skeptical of Alaska’s ability to finance the requirements of statehood came away recognizing the potential for modernizing Alaska’s tax system and increasing resource development for an economic base.
These hearings were vital because they focused the issue of Alaska statehood and placed it directly before Congress, but they weren’t enough. Land grant provisions proposed by the U.S. Departments of Agriculture and Interior were not acceptable to the committee, and a compromise was worked out. On April 14, 1948, a new statehood bill introduced by Delegate Bartlett was reported to the House, where it was bottled up in the Rules Committee despite a special message from President Truman. After all that had been done, Alaska Statehood died at the end of this Congress.

They had come a long way and Alaskans seeking statehood were still optimistic.

Bartlett’s bill had been discussed in several committees. The national press was giving considerable attention to Alaska and Hawaii statehood efforts. For the first time, hearings had been held in Congress on statehood, and a statehood measure had been approved unanimously by a committee of Congress.
Alaskans now knew well why they wanted statehood, and they were on a roll!
1 Antonson and Hanable, Alaska’s Heritage, P 286 Alaskans See Statehood…
2 Nast, Claus-M., 49 At Last! The Battle for Alaska Statehood, Epicenter Press, 3rd Edition 2009, p90.
3 Annual Report of the Governor of Alaska (1943), pp. 1-5; William R. Carter, “The Sixteenth Alaska Legislature: A Report to the People,” in Gong. Record, 78 Cong., 1 Sess., pp. 8226-27 (October 12, 1943)
4 ”What Alaskans Say About Statehood,” Alaska Life, September 1946, p9 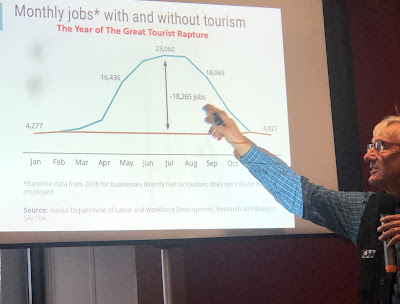