The Alaska Department of Labor and Workforce Development announced on October 16 that September jobs in our state are down 11.0 percent from last September; a loss of some 37,600 jobs. A presentation earlier this month in Wasilla, from DOL Economist III Neil Fried, examined economic trends during the China Virus Pandemic, revealing that the Mat-Su Valley seems to be fairing better than any other part of the state.1

These are the hard numbers but there is more to the story. 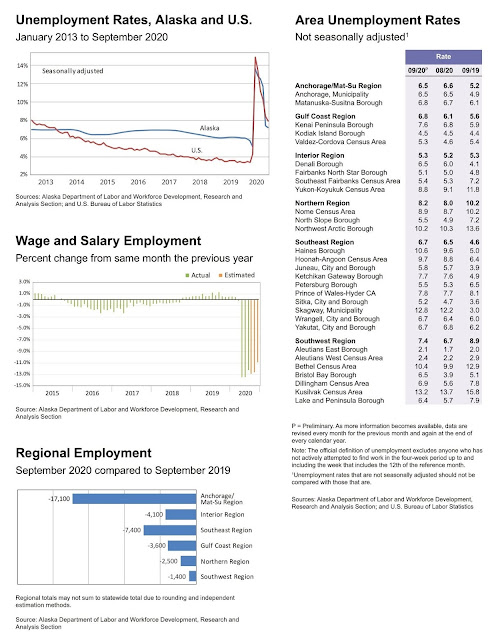 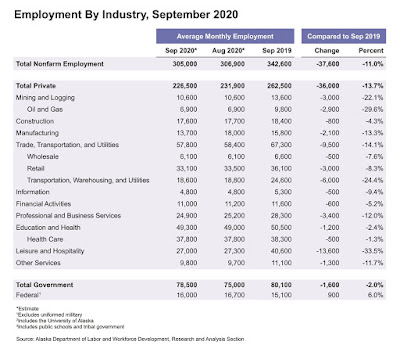 
Mat-Su Valley employment for the first part of the year by industry: 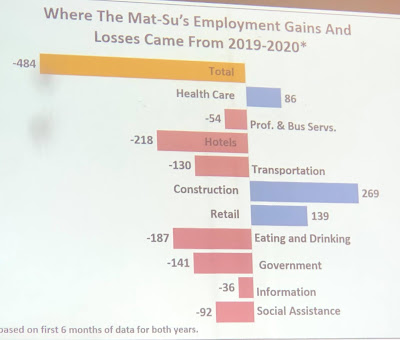 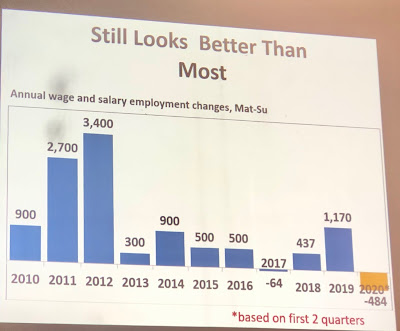 “This is data from the first two quarters of 2020; the first data that reflects what is happening now to the economy during the 2nd quarter—April, May and June—based on the payroll ESC Reports that employers send to the Alaska Department of Labor every quarter,” Fried explained. “These are not guesses, these are not estimates, these are actual numbers from the data. What this is saying is, after all these years of growth, although we did decline a little bit in 2017 by 67, employment did fall in the first half of this year in the Valley compared to this time last year by 484 jobs.”

What about population considerations? 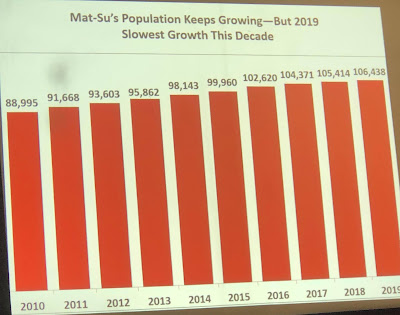 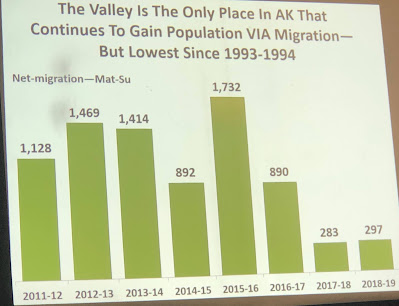 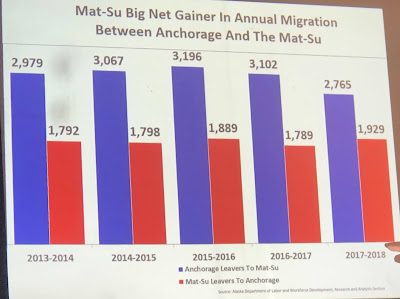 “We don’t have any current population growth data for the Valley yet,” continued Fried. “It will be interesting to see when the 2020 census comes out. We know the Valley was one of the only places in the state growing in 2019 while the state was actually losing population in 2018 and 2017. It is possible that the Valley did grow in 2020 but we do not know that. We (Department of Labor) don’t do estimates in 2020—we leave it to the Federal Government.” 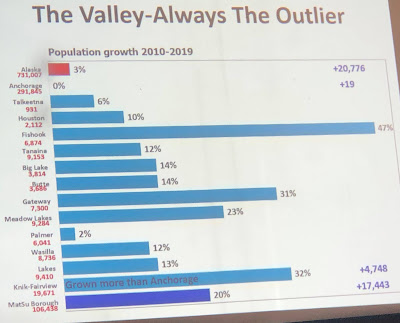 All measured industries lost jobs over the last year, September to September, with Federal Government jobs showing the only increase--by 900 jobs--due to the census.

“We were hit pretty hard,” Said Fried. “This is the fastest recession in state history; it isn’t the deepest yet but I think it will end up being that from a statewide standpoint.”

And this is how Mat-Su compares to other regions: 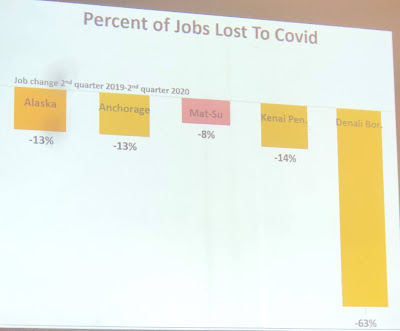 “Alaska got hit harder than some other places because of timing. We have the most seasonal economy in the United States by a long shot. We are in our own economic bubble here,” Fried explained. “The pandemic happened beginning in Feb-Mar so it had a huge impact on our seasonal industries—particularly tourism. In that sense we got hit harder probably than much of the rest if the country. The other thing that has been hit really hard is the oil sector—not directly because of covid although covid caused it—but because of low prices.”

This is important for the Valley economy because the Valley comprises the second largest workforce for the slope next to Anchorage.

“This shows numbers of people working in the oil industry and it is a sad story,” said Fried.  “During the recession we lost 5,000 jobs in the oil industry; it started to recover again in 2019, then 2020 came along and we started to lose jobs again. That is having an impact on the Mat-Su Valley. That industry has taken a pretty good hit: $40/bbl oil is better than -$3/bbl. They may be making a little profit at that level but it would be better if it came up to $50-$60/bbl to see the industry become more robust and investing more in Alaska projects.” 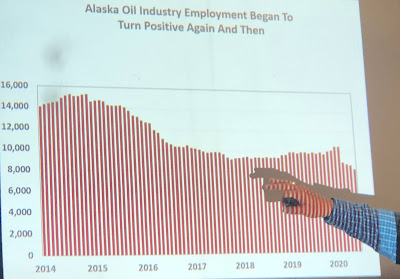 No mention of the General Election Ballot Measure to raise taxes on the Oil Industry.

The numbers are stark:

Statewide leisure and hospitality was down the most, with 13,600 fewer jobs than last September (-33.5 percent). The transportation, warehousing and utilities sector had 6,000 fewer jobs, mainly in scheduled air transportation and scenic and sightseeing transportation. Professional and business services and retail were also hit hard, while construction and manufacturing appeared to be slightly better off than initial estimates showed, according to Fried.

“Alaska went from one of the lowest unemployment rates we have ever experienced in our history to one of the highest within a couple of months,” said Fried. “The unemployment rate is beginning to come down a little bit, but it is problematic still.”

According to the recent DOLWD press release: The state’s seasonally adjusted unemployment rate declined slightly to 7.2 percent in September, and the comparable U.S. rate was 7.9 percent. Jobs and unemployment insurance claims will be better barometers of the state’s economic health in the coming months than the unemployment rate, which is a complicated measure that relies on statistical modeling and a household survey that has been difficult to conduct during the pandemic. Job losses remain historically large, and claims were more than six times higher than in September 2019. 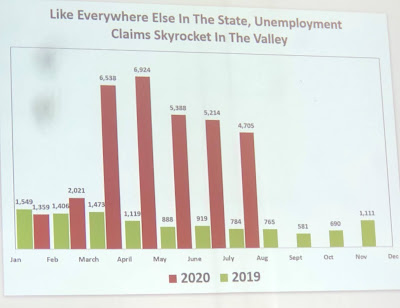 But there is more to this picture.

According to Fried: "Qualifications for Unemployment benefits has been liberalized dramatically. People who were self-employed, or could have been self-employed can now receive benefits. That has dramatically increased the potential number of people receiving unemployment to the point that comparing today to one year ago, or even three years ago, is under different rules. A much bigger group is eligible for UI that were never eligible before."

Does this translate to an increase in alcohol consumption? 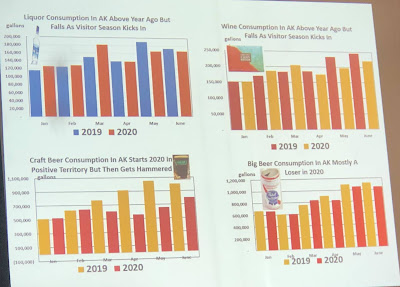 Perhaps, but for those of us who maintain a sober lifestyle, one industry on the upswing during this crisis is a cause of some concern. Marijuana intoxicants are an economic high point. 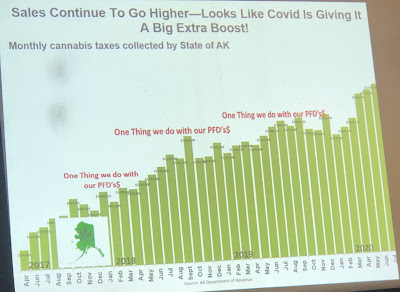