The Wonder of Small Engines

I have spent plenty of time messing around trying to start a small engine in the past. Now when it won’t work I load up whatever machine that small engine is on and take it to a professional.

I say this as someone who has taken classes, and even overhauled small engines myself. But to this day I find the damn things just too frustrating when I have something I want to get done using a small engine that won’t start. So, I don’t waste any time messing with small engines anymore if a particular small engine won’t run right away.

I have also learned some things about how to keep small engines ready for use when needed. 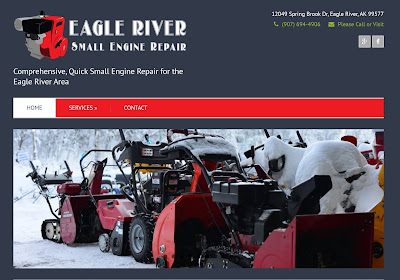 We are very fortunate in Eagle River/Chugiak to have the best small engine repair shop I have ever experienced. John Trescott has been doing business at 12049 Spring Brook Dr. for 17 years and admits the reason he makes it look easy is because he has been doing it for so long.

“I have a lot of practice,” he explains. “When I started out sharpening chain saws I had to learn. As I have done so many now, I am good at doing it efficiently. If you do something every day you are going to be good at it.” 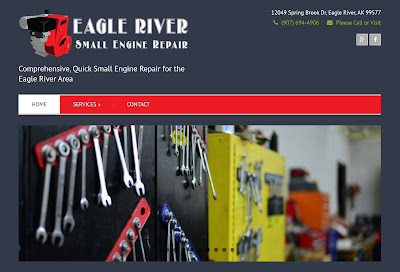 John puts this into further perspective:

“I’ve been teaching my son how to shoot a rifle. We take things to the range to shoot and I hit the bullseye every time with any weapon. My son asks: How do you do that? The answer is I shoot a lot! I have a membership at the Birchwood Range and I go there to shoot and it relaxes me. To me it isn’t a gun thing so much as it is an accuracy thing,” he explains. 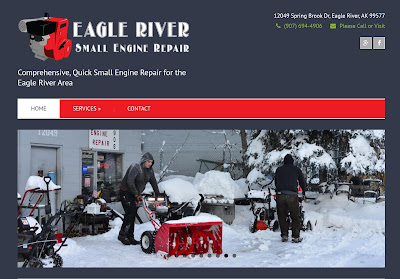 “I had been around mechanical things all my life,” he explained. “My father worked for General Motors for a good part of his life, in Linden, New Jersey. I came to Alaska after I got out of the Army; I wasn’t going to spend the rest of my life in New Jersey! Everything was the same there, and it wasn’t a place I wanted to be, so I came to Alaska in a Dodge Aspin Station wagon. We put the rear tires in the Atlantic Ocean, drove across the United States and put the front tires in the Pacific Ocean.”

The basics of small engines

Generally small engines are small-displacement, low-powered internal combustion machines serving as an independent power source for an implement, typically less than 15 horsepower. They usually have a single cylinder that is air-cooled.

There are two kinds of small engines: Two-cycle and Four Cycle.2

“You get a lot of power with two-cycle but when it comes to engines everything is a trade. If you want all the power you must give up efficiency,” Trescott said. The four cycle engine requires a heavier block and cannot be turned upside down, but it runs cleaner and doesn’t require mixing gas. When you gain the power from a two-cycle you are increasing polluting emissions.

Trescott has his niche in the market. He works on small engines used to power lawn mowers, snow blowers, chain saws, generators, string trimmers and such. He doesn’t work on ATVs, outboard motors, motorcycles or snowmachines. Other local small businesses serve customers needing those machines. John will refer customers to those other craftsmen and they reciprocate. This assures Eagle River Small Engine Repair can guarantee quality workmanship and reasonable turn-around time for their specific services.

How do YOU deal with these things? 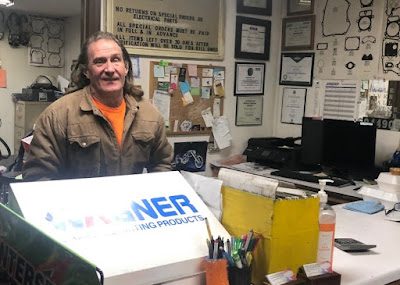 “The first thing I do when approaching a new machine is check the oil,” explained Trescott. “You can find out almost everything about how a person takes care of a piece of machinery by how the oil looks. When I look at that oil and it is black and thick, that tells me a lot. The level of the oil tells even more. The best thing anyone can do for any engine is check the oil before starting it.”

Standing in his shop Trescott explains further: “I put each machine on this platform and lift it to working height; check the oil and address the customer complaint listed on the work order.” He cleaned up the deck of the lift as we talked. Trescott recommends bringing in a machine for tune-up and routine maintenance every two years. 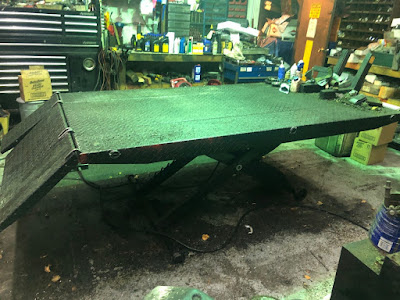 Proper engine maintenance and on- and off-season preparation are crucial” to small engine performance, according to Trescott. Without it engine performance could be diminished and lifespan of the machine drastically reduced--meaning you’ll be spending more time and money on repairs or replacements. By making regular engine maintenance a habit machines run at peak performance and the potential for injuries and costly damage to components is reduced.

He demonstrated this point with a broken gear on the bench:


“There is only one thing that causes this,” Trescott explains: “It is the result of not using the proper shear pin in the snowblower auger. This gear was in the transmission and when the shear pin wouldn’t break the cost went from $3 for a set of shear pins to $300 for a new transmission. This is the main drive gear for an auger transmission. You MUST follow the manufacture’s specifications. That’s what the manufacture’s specifications are for--to assure the right parts are assuring safe operation of the machine.”

Before starting a small engine at the beginning of a season, whether summer grass cutters or winter snow blowers, it is important to inspect the engine on a stable, flat surface in a well-ventilated area away from ignition sources. All components need to be checked including spark plugs, muffler, and fuel caps. Wires and fuel hoses must be intact and in good condition because damaged fuel hoses can allow fuel to escape, creating a fire hazard.2 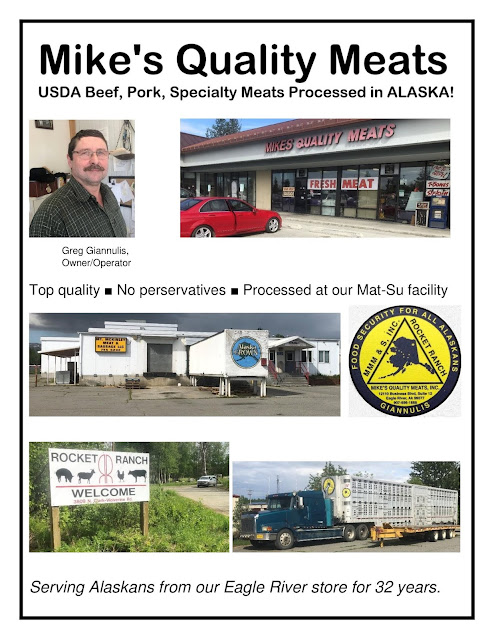 My own problems with small engines usually boil down to poor fuel. If it hasn’t been treated with stabilizer the fuel degrades and becomes stale. Stale fuel causes residue buildup that can plug the carburetor and prevent the engine from starting. Burn off or throw out all of the fuel in a machine before storing a small engine. Begin the season with fresh fuel.

At the start of the season it is important to make sure the engine and recoil starter (if the engine is equipped with one) is free from dirt, grass or other debris. Check and clean cooling fins under the shroud that could cause the head area to overheat if blocked. You can use an air hose to blow off the engine or wipe it down with a dry rag. Avoid washing it with a hose or pressure washer, which could force water into the engine and cause corrosion. 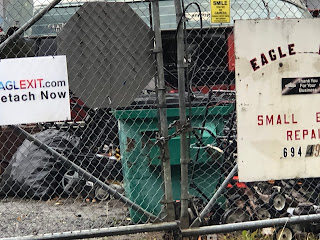 When people drive by this place they might be struck by how many machines you have in your yard. How did you get so many? I asked. 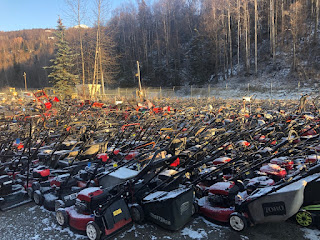 “They are mostly donations—from people who have bought a new lawnmower and offer it to me--heck yeah I’ll take it for parts,” said John. Some are too expensive to repair. Say the repair on a lawn mower is $150 and a new one costs $150. I advise that it is better to spend that money on a new machine.”

He continues: “For me, it’s not about the money, it’s about customer service. I could make that $150 off that customer but the customer is not going to be happy—especially if the customer won’t get any longevity out of it.

It’s all about customer service.

Do you have customers who have been with you all 17 years you have been in business?

“I have! Eagle River has been very good to me,” Trescott enthused. “I wouldn’t be here if it wasn’t for my customers. This Covid Pandemic has shown what great customers I have here; when the Mayor shut me down it really hurt me. Everything stopped. My income went to zero while costs of doing business stayed the same. The rent on this shop, my house payment, everything stayed the same but income stopped. I was worried.”

“But there were customers who brought in machines that were not due for another tune up until next year,” he continued. “They asked me to do the maintenance early. I could tell a lot of people came to give me business at a time I realty needed it and it really made a difference. It was a game changer; it kept me in business. My customers kept me in business! I couldn’t ask for anything more; they gave me a hand up, not a hand out.”

Have you had to change the way you do business? I continued. I’ve noticed you used to have some young men around helping you but now you are doing it all alone?

“With the virus there have also been new opportunities for some,” Trescott replied. “The last guy I had working for me was able to get a lot more money as a truck driver. I understand; he is a young man, with two kids, I would never get in a young man’s way of making more money. In fact, most of the guys I’ve had working for me were in their first job. I tried to teach them the discipline required of a job, doing things right the first time.

What do you want your legacy to be?

Our region of the state of Alaska is privileged to have a number of quality small businesses like Eagle River Small Engine Repair. I welcome the opportunity to tell your story. Forward this link https://donnliston.blogspot.com/2020/11/the-wonder-of-small-engines-john.html  or let me know of a business deserving to be highlighted: donn@donnliston.com.

We aren’t just a suburb of Anchorage, you know.

2How a two-cycle engine works

3How a four-cycle engine works:

A four stroke engine delivers one power stroke for every two cycles of the piston (or four piston strokes). There is an animation to the right (Figure 1) of a four-stroke engine and further explanation of the process below.

1.     Intake stroke: The piston moves downward to the bottom, this increases the volume to allow a fuel-air mixture to enter the chamber.

2.     Compression stroke: The intake valve is closed, and the piston moves up the chamber to the top. This compresses the fuel-air mixture. At the end of this stroke, a spark plug provides the compressed fuel with the activation energy required to begin combustion.

3.     Power Stroke: As the fuel reaches the end of it’s combustion, the heat released from combusting hydrocarbons increases the pressure which causes the gas to push down on the piston and create the power output.

4.     Exhaust stroke: As the piston reaches the bottom, the exhaust valve opens. The remaining exhaust gas is pushed out by the piston as it moves back upwards.