When the Flash Mob Wants your Land

Imagine you are fortunate enough to be able to purchase a nice parcel of Anchorage woodland for your family, near a quiet subdivision above Potter Marsh, so you can hike on your own property, that happens to be near Chugach State Park. You are able to share the natural wonder of the area with your neighbors. But also imagine that just after closing on the purchase your employer needs you to go out of country for a few years. What if you return to discover the Municipality of Anchorage (MOA) has initiated and is actively promoting trespass on your property despite safety hazards that poses?

Would YOU be upset? That in a nutshell is what happened to Frank Pugh.

On one occasion a neighbor friend called to say that 15 or more cars were illegally parked in an intersection near his home so they could hike on his property! These vehicles were interfering with access to the neighbor’s driveway. The neighbor reported that he called the Anchorage Fire Department (AFD) because this situation wqs dangerous in case of fire. Another neighbor calls Anchorage Police Department (APD) because the cars are preventing him from moving equipment down the mountain. Of course, neither AFD nor APD take any action to remedy the situation.

Some months later a hiker who drove from outside the neighborhood to hike on Pugh's property threatens him on his own property. Upon calling APD for help, the dispatcher plays down the incident--refusing to send an officer out.  So Pugh posted signage and restricted access to this entry point. Several months later Pugh received a surprise letter from the Municipal Attorney William D. Falsey threatening legal action if he did not reopen that entry point.

The big issues here: When is it necessary for a government entity to take a person’s land—when there is a prevailing public interest? When taking that land or imposing an easement on it for public use serves a small group of activists with an entitlement mentality? Exactly when does the hand of government override your inherent rights to real estate you have purchased for personal use?

An estimated 70 established trails provide access to Chugach State Park, each with a trailhead, where hearty Alaskan hikers, bikers, trekkers or skiers can park their vehicles before encountering wilderness near to Alaska’s largest city. I happen to live near to one of the top 20 trailheads listed at https://www.alltrails.com/parks/us/alaska/chugach-state-park. Having a nearby trailhead means increased traffic on our mountain road and sometimes crowded parking at the switchback where hikers launch.

I pay homeowner taxes to the Municipality of Anchorage to live here.

Earlier this summer an apparently impaired driver rolled his car off the road onto my own property. We were all lucky that trees stopped his car from rolling down into my front yard where my wife Waneta Liston was tending flowers. 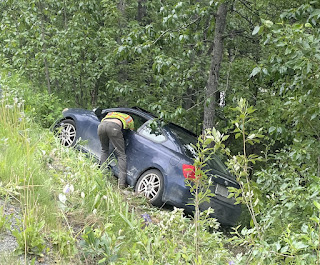 Living in this situation is generally tolerable, but for many of the popular trailheads the Alaska Division of Parks manages, fees are collected. The trailhead near my house has no fees and cars park in a widened area around the perimeter of the switchback. This free parking may attract cheapskates to trailheads like the one near my home.

Should 70 trailheads be enough to gain access to this local park wonder? In fact, accessibility is a popular theme in promotions of Chugach State Park.

But for some people there will never be enough parks, enough bike trails, or enough Chugach Park trailheads. I remember well the campaign to establish our plethora of parks and bike trails in Anchorage--up to and including establishing the 11-mile Tony Knowles Coastal Trail--to celebrate a still living Anchorage Pied Piper of populist liberal activism.


Their theme: Parks and trails are good, private property rights be damned.

For background: Four trailheads access the Turnagain Arm Trail along the northern shore of Turnagain Arm, originally known as the Old Johnson Trail, that once ran from Knik to Girdwood. The trail now runs from Potter Station to Windy Corner, with four access trailheads: Potter at mile 115.1, McHugh Creek State Wayside at mile 111.7, Rainbow at mile 108.3, and Windy Corner at mile 106.7. Maintained by the Alaska Division of Parks, these trailheads have been established for hearty Alaskan outdoorsmen, their families and dogs, who are respectful of other people’s rights and don’t need to park illegally in neighborhood roadways to access the park.[1]

So, who has the right to randomly enter private property?

An engineer for British Petroleum Corporation, Frank Pugh and his family purchased this acreage during September of 2012. About two months after closing on the purchase, Pugh was dispatched to the Republic of Azerbaijan, a majority Muslim country which proclaimed its independence on August 31. 1991, shortly before the dissolution of the Soviet Union. BP needed Pugh’s extended reach drilling expertise at to help solve drilling problems in a place needing increased oil production. During initial interactions with neighbors before leaving Anchorage, Pugh had established that he didn’t mind neighbors using the property respectfully and he only had a minimum gate to keep motorized vehicles out. This was permissible use under the law, not hostile to the property owner. 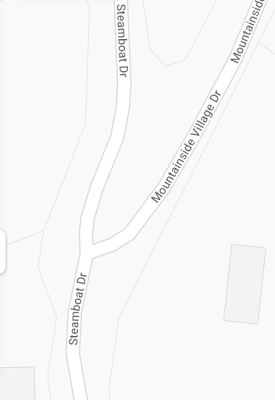 Now Pugh had a problem.  The MOA had initiated and published a proposed Chugach Park Access Plan which highlighted this property as a potential entry point. This plan was never passed by the Assembly and only a draft version is available. [2] 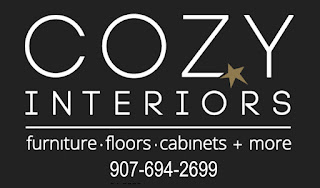 Here's the setup: Create interest in the possibility of accessing the park through this private property to stimulate a relatively few activist Anchorage outdoors enthusiasts to flash mob the property and create use demand. What Pugh had hoped would be an amicable relationship with his neighbors suddenly became a new form of harassment by activists beyond the neighborhood.

In Pugh’s own words: At the request of my neighbor next to our gated entrance, and due to the fact that I had been recently threatened by a person that had driven from outside the neighborhood when I simply questioned whether or not he was a neighbor, I decided to reinforce the gate in October 2015 to deter people driving from outside the neighborhood from entering the property. The gated entrance had simply become a nuisance which threatened the typically quiet neighborhood environment. The intent was to discourage individuals living outside of the adjacent neighborhoods from driving to this area and illegally parking along the neighborhood streets to enter our property while continuing to allow our neighbors to pass through other points on our property.

During lunch recently with the mild-mannered Pugh, he described to me his intentions. It is understood that this large prime residential section has great potential for development, which he of course does not want encumbered.

Accelerating the problem for Pugh, Mayor Ethan Berkowitz’ Municipal Attorney, Falsey on March 2, 2016 issued a letter claiming a public prescriptive easement exists across Pugh’s land, and demanding that barriers he had constructed to protect his property be removed. From that time to now  Falsey and others in the activist cabal have threatened and tried to coerce Pugh to accept their terms. The now former Muni activist attorney--and former city manager--claimed a long extinct homestead road of Ivan and Oro Stewart exists from the established roadway in the switchback of Steamboat Drive at its intersection with Mountainside Village Road across the property.[3] 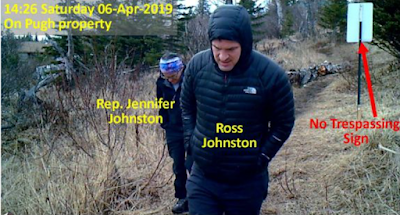 Thus began an exchange of letters between counsel for Pugh and Municipality of Anchorage attorneys. Another activist attorney, Thomas Meacham established a non-profit corporation, Friends of the Stewart Public Trail, Inc. to rally support in the effort to force public access by random persons to Pugh’s property.[4] https://opencorporates.com/companies/us_ak/10086509

Battle lines are drawn. A new mayor Dave Bronson should be reason for hope for Pugh, who has lately filed trespassing charges against flash mob participants. He has contacted the (APD) on two occasions, the first in 2019, simply registering a complaint against Landmine clowns, including elected official Christopher Constant, Ross Johnston, and Jennifer Johnson. On August 3, 2021, Landfield and company trespassed again, and Pugh again contacted APD to demand their arrest. According to a Landmine post: “Uniformed police officers arrived at Landfield’s residence to question him” and also contacted the associate by phone.

They apparently needed to create a story to sensationalize.

Falsey may no longer be MOA Attorney but he needs a job and still knows how to churn cases. He started this one as an MOA employee, you know. [5] 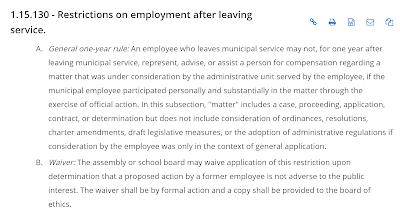 Despite a Municipal Ethics Code that restricts employment for one year for compensation on matters under consideration by the administrative unit served by the employee during municipal service, Falsey successfully appealed to the Assembly for a waiver of the regulation to continue pursuing Pugh on behalf of the mob. On August 10, three Assembly members, Jamie Allard, Crystal Kennedy, and John Weddleton voted against allowing Falsey an ethics regulation exemption.

For some attorneys laws and regulations are for people who cannot find ways to break them legally. 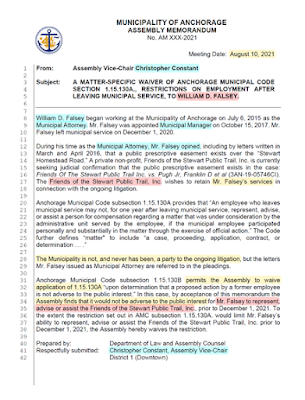 earn more about this situation or to contribute to the defense of Frank Pugh’s property go here:

Advertising is available on this blog. Contact me at donn@donnliston.com