Is this any way to run a Railroad? 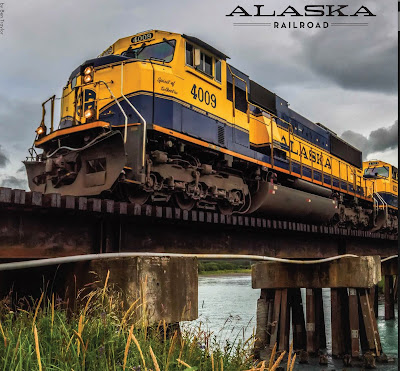 Alaskans love the Alaska Railroad. I was reminded of what a delightful part of Alaska this historic railroad represents when Waneta and I won a free trip to Denali during the Willow Winter Carnival raffle in 2019. We enjoyed every minute of the trip in mostly empty cars during summer of 2020. 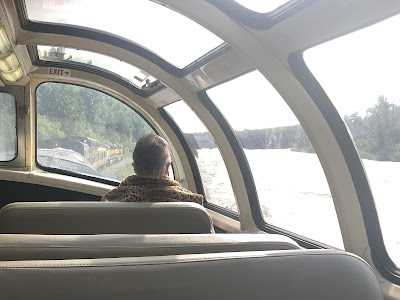 This is our train. Alaskans subsidize its operation. 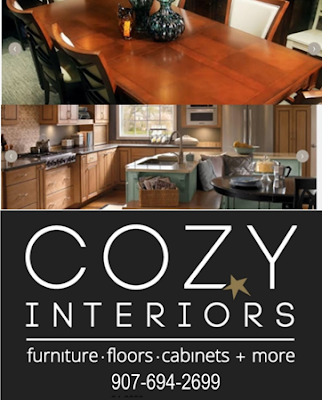 ARR has been our baby for 30 years.

The Alaska Railroad Corporation 2020 Annual Report reveals the decline in revenues it has recently suffered. Waneta and I were two of the mere 32,000 passengers—down from an average ridership of half a million passengers—who rode the trains last year. We used free tickets. 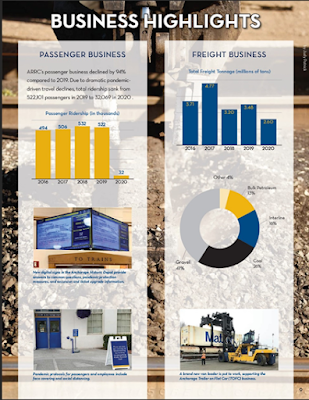 The US Congress agrees to fund construction and operation of a railroad from Seward to Fairbanks. Estimated construction cost - $35 million. 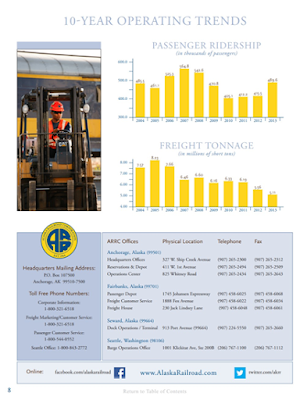 Tourism is only part of ARR’s function. Passenger travel is not enough to sustain the corporation that manages this system. The bread and butter of ARRC is 1) hauling freight, 2) grants from the government, and 3) real estate. Passenger revenues are typically 20 percent of revenues. 2020 saw another financial downturn in that respect: ridership declined and grants again increased. 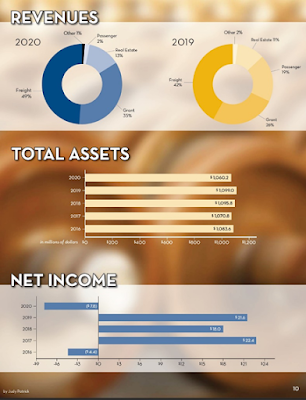 This corporation is hungry.

Those are the big numbers.

President Warren G. Harding travels to Alaska to mark the completion of the Alaska Railroad by driving the golden spike in ceremonies at Nenana, one of the state's largest cities at the time. President Harding died from an attack of food poisoning on his return trip to San Francisco on August 2, 1923. 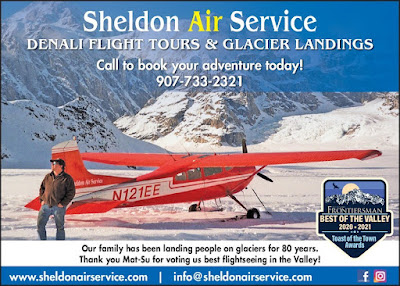 For an overview of how our State Railroad has performed, I have gone through the financial report for every year since 2005 to consider how the leadership of the company describe results of their efforts. Since the primary mission is to operate a railroad, I gleaned from the annual reports basic operation costs/expenses and created an overview chart with those simple numbers. I am not an accountant and the complicated financials of this corporation are far beyond my training, but as Alaskans we can reach some general conclusions about the railroad gifted to us by the federal government, and perhaps explanations for current business practices. 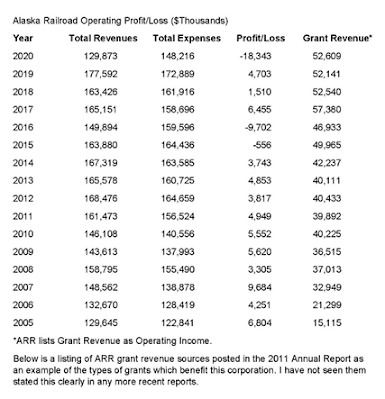 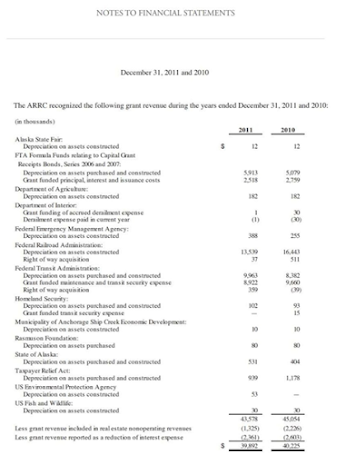 President Ronald Reagan signs into law legislation authorizing transfer of the Alaska Railroad to the State of Alaska. 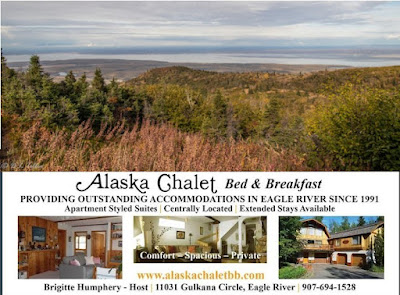 This railroad is considerably more than the train some of us we were gifted under the Christmas Tree as children; we like our railroad, and we want it to be successful. But some Alaskans have begun to express concern about business practices regarding easements on privately owned land. They have become an organized political force. 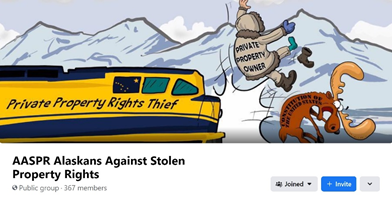 WHO ARE WE AND HOW CAN YOU HELP STOP THE INJUSTICE?

And their message has become shrill: 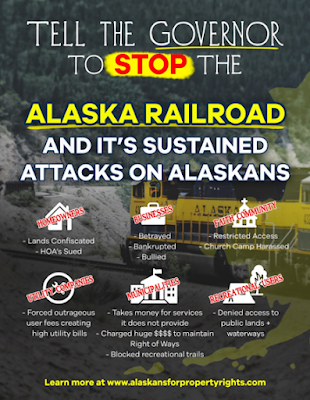 I first learned of these concerns as staff for Rep. Lora Reinbold in 2018 when an effort was made to address railroad easement property right concerns with House Joint Resolution No. 38. I recall extensive conversations with representatives of ARRC--including former Gov. Bill Sheffield who is now Director Emeritus on the ARRC Board of Directors. Sheffield is the only Alaska governor to be impeached but he has been a mainstay on the ARRC Board.

Former Governor Bill Sheffield is appointed to the Board of Directors and elected chairman.

Another bill in the 2017-18 Alaska House (HB 93) had a companion bill in the Senate (SB 68), sponsored by then-Sen. Michael Dunleavy clarifying state law to protect landowners with ARRC easements. [4] That resolution (HJR 38) went through two committees and was rolled into HB 119 which passed the legislature in the very last hour of the session despite a huge lobby effort against it by the ARRC. It established the intent of the Alaska Legislature and expressed concerns about ARRC business practices.[5] 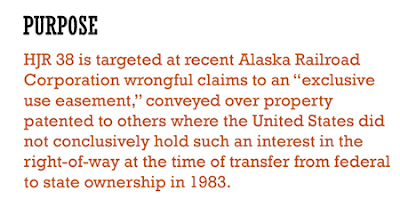 Alaska Congressman Don Young was part of the deliberation that transferred ARR to the state in 1982 and in an April 16, 2018 letter to Alaska Rep. Chuck Kopp the intent was spelled out:

House Joint Resolution 38 outlines what can only be described as a failure by the agencies to understand clear direction from Congress and to dutifully recognize basic tenets of due process, needlessly resulting in a cloud on title for both the Alaska Railroad and its neighbors along the right­of-way. There is no way a bill quietly annexing private property rights, especially without any notice or compensation, would have passed Congress in 1982. You only have to read the plain language of ARTA to know that -the transfer of "rail properties of the Alaska Railroad" over privately owned land only included the "Federal interest" in those lands. If the federal government did not own it, it was not included in the transfer. There is no canon of statutory construction, or even common sense reading, that could argue an unconstitutional taking of private property rights was the intent of Congress.[7]

Direction from the Alaska Legislature and our US Congressman didn’t solve the problem, which seems to be getting more elevated. The parties are likely to be in court before too long although Gov. Dunleavy has urged mediation of the issue. These Alaskans who own land with railroad easements are facing a corporation with tremendous resources. As recently as August 2, 2021 Gov. Dunleavy sent a letter to ARRC Vice-Chair Judy Petry urging the corporation to back off. In that letter Gov. Dunleavy conveys his view that the transfer of the railroad rights-of-way for train tracks and utilities does not mean exclusive use ownership. Because ARRC has sued a South Anchorage Homeowner’s association, Flying Crown HOA, and asked the court for summary judgment, other interests have stepped up to charge they have also been harmed by ARRC. [8]

In their legal brief ARRC in federal court asserts that there are two questions at issue:

Defendants have alleged that the State cannot give to ARRC what the Federal Government never possessed. They have launched a public education campaign to explain this point. 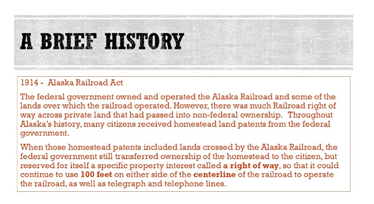 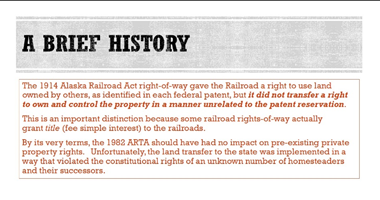 The Municipality of Anchorage on August 8, 2021 filed a brief in opposition to ARRC’s request for summary judgement. (Case 3:20-cv-00232-JMK Document 86). It concludes the following:

As described above, the right of way reservation in patent under the 1914 Act reserved an easement limited for railroad purposes similar in kind to the types of easements created under the 1875 ROW Act and the 1898 AK ROW Act. Contemporary legislation and legal precedent support this conclusion in addition to broader legal precedent and public policy considerations. Further, no more than the easement limited for railroad purposes which was reserved under the 1914 Act was transferred to ARRC by ARTA. To find otherwise would go against the public policy supporting the determinant nature of deeds and create an impermissible, unconstitutional interpretation of ARTA resulting from a federal taking of property rights previously conveyed under patent.

The width of the 1914 Act railroad easement is “one hundred feet on either side of the center line of any such road.”  At Potter Marsh, the pipeline runs parallel to the tracks between railroad mileposts 100.33 and 103.12 along the Turnagain Arm.  The pipeline is buried approximately 80 to 97 feet to the southwest (ocean side) of the tracks. This is well outside of the railbed itself.  The majority of the pipeline at Potter Marsh is within the Turnagain Arm tidal area—an expanse of mudflat that floods at hightide and is scraped by ice in the winter. The fee interest to the relevant Potter Marsh land was conveyed to the State of Alaska in 1969 by Patent 50-69-0199, subject to a reservation for the 1914 Act right-of-way easement.  The Railroad currently charges $5,875/year for ENSTAR’s permit to this stretch of subsurface tideland. This is more than six times what ENSTAR would pay were it to simply acquire a right-of- way from the State of Alaska Department of Natural Resources, the actual owner of the tideland.

ARRC has already initiated a payment scheme for recreational users, rock climbers and wind surfers on the ROW along Turnagain Arm and has expressed interest in expanding this practice.

Alaskans love our railroad. We are proud to take visitors on the trains through pristine wilderness to magical destinations. We respect our railroad’s need to be profitable and accept the reality of that challenge. Historically, intrepid Alaskans have settled Alaska homesteads and depended upon the Alaska Railroad, accepting its need for room to operate on lands it doesn’t own outright. But that is where our charity ends; we do not expect the Alaska Railroad to be a predator organization, usurping land, overcharging for use of land or dragging good Alaskans into federal court at great expense to bully landowners who must rally popular support for justice. That isn’t the Alaskan way; this bull-headed business practice tarnishes the brand when we all know the AARC future is bright for many reasons.

This spectacle needs to end and ARRC can end it NOW. 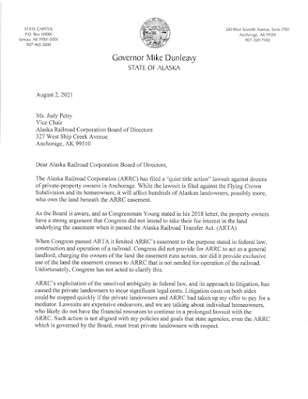 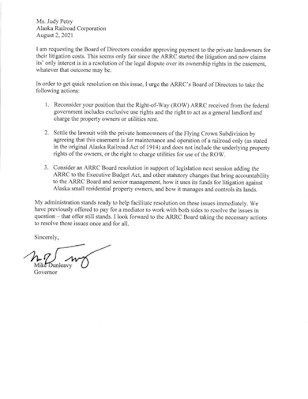 Advertising is available on this blog. Contact me at donn@donnliston.com 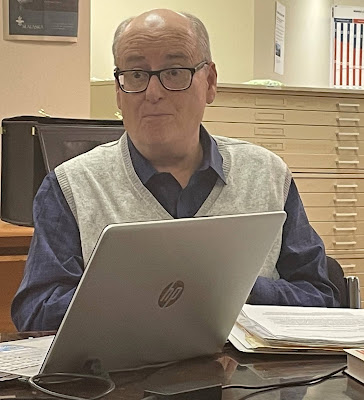